This page displays old news items as they have appeared on the Home page. 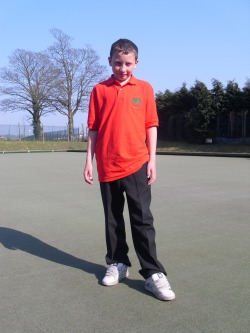 On Saturday 17th April 2010 that Wales Under 21s Team took on their English counterparts at the Bro Myrddin Indoor Bowls Centre in Carmarthen. Two Pembrokeshire players were selected to represent Wales in the competition - Jonathan Gladstone of Hook and Aaron Lloyd of Penally (pictured), who made his international competition dubut. The competition took the format of 5 teams of 4 playing for each country, in 4 sessions over the course of the day. Aaron played in two of the games with Tom Jones and Dale Gorman from West Glamorgan and then Gavin Rees (West Glam) in one game and Michael Powell in the other (Brecon and Rads) and the team won both games, contributing to an overall win for Wales, beating the English team by 10 whole points. The standard of bowls was high and all players gave an impressive performance. Congratulations to Jonathan and to Aaron, which I'm sure is a name we will be hearing more of the future! 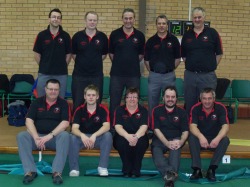 After a very busy season once again, the main league is now over. At the half way point of the main league Penally had established a three point lead over Freystrop with Badgers taking third place from Hook, both a further three points behind but with better shot difference.

The second half of the season was disrupted by snow and ice in the first few weeks of January and meant that clubs had games in hand coming towards the end of the season. The league was building up to an exciting finish and could have gone one of three ways with only a few weeks to go, especially if Penally and Freystrop could have taken advantage of a Hook slip up at Little Haven, when they lost 5-3 with only two games to go. Unfortunately, neither could quite finish as strongly as they would have liked.

This meant that the title went to Hook for the third consecutive year and was due reward for their performance in the second half of the season where they dropped only 7 out of the 72 points to be played for.

Congratulations to Hook on winning the main league for the third consecutive year. 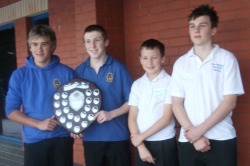 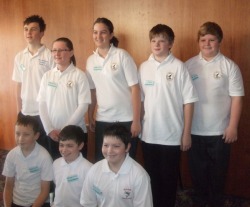 Little Haven Bowls Club has recently welcomed six new bowlers to the club: Des Thomas, Judith Thomas (no relation to Des,) Ceri O'Shea, Janet Broughton, Janet Dooley and Keith Gardham. They are all very keen to learn and progress and will get every encouragement to do so. And to help them along, Rob Barton (Penally) will be visiting the club to give one of his excellent coaching sessions.
Brendan Slater, Little Haven Bowls Club

Recognition of Achievement for David Williams 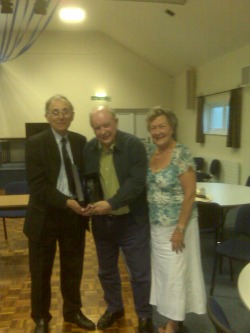 At its recent AGM, Pembrokeshire Short Mat Bowls Association made a special presentation to David Williams in recognition of his contribution to the development of the Association during its 20 year existence.

David has been a stalwart of Pembrokeshire Short Mat Bowls since the Association’s formation in 1989.  As a player, he was part of the Letterston team that won the league trophy in the early days and has won numerous County knockout trophies.  He was one of the first Pembrokeshire players to be selected for the Welsh National Team, playing in several British Isles and World Championship competitions in the early 1990s.  Later, David served as a non-playing captain of the Welsh team for many years and was largely responsible for introducing many of our county’s excellent young bowlers into the national scene.  He has always encouraged youngsters into the sport believing they are the future of Short Mat Bowls, and the current County team is a good mix of youth and experience.

David has served many years as Pembrokehsire’s Team Manager but has now decided it is time for retirement and to hand over the reins.   One thing is for sure, however, we can always depend on David to lend a hand or give a word of advice when needed.

County President, John Munt and County Chairman, Eileen Hodgson thanked David for his sterling service to the County and wished him well in his retirement from short mat bowls.