On Sunday 19th June 2011 the Pembrokeshire county team met with a team from the South Pembrokeshire Friendly League at Heatherton Bowls Centre. The day began with a warm welcome from Mr John Muny, PSMBA President, and from Mr Mark Fowden, Chairman of the SPFL.

The enthusiasm and sportsmanship from both teams was impressive, and friendships were forged on and off the mats. The games showed talent in both teams and spectators were treated to some excellent bowling and some close games. A special thank you to umpires Gordon Williams, Selwyn Jenkins and John Munt who were certainly kept busy throughout the day! Also a big thank you to those who helped roll out and put away the mats and other equipment.  At the end of the day, Eileen Hodgeson, PSMBA Chairperson and Mark Fowden gave some closing remarks. An enjoyable day was had by all and many players expressed an interest in more competitions between the two county teams in the future.

Pembrokeshire Under 21 Stars in Welsh Team 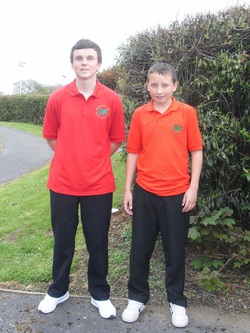 Two young Pembrokeshire players represented Wales in the annual Under 21s International match against England on Saturday 16th April 2011. The competition was held in Carmarthen and Tom Windsor (Narberth) and Aaron Lloyd (Penally) did Pembrokeshire and Wales proud, contributing to a win for Wales - 27 points to 13! The standard on the day was outstanding and the competition is an excellent opportunity for the young players to gain some experience. On the same day, the Wales Under 16 squad played a friendly competition against England's Under 16s. Wales were also triumphant in this competition. Well done to Tom and Aaron (pictured) and these are names I'm sure we will be hearing a lot more of in the future! Da iawn. 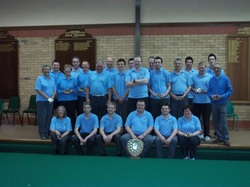 Congratulations to Hook who have won the Main League and will go to Llandrindod Wells next Saturday to represent Pembrokeshire in the League Winners' Cup.  It was a closely fought battle with Tavernspite with only 6 points separating the top 2 teams.

On Sunday 23 rd January our Juniors represented Pembrokeshire in the under 16 Welsh Doubles competition in Carmarthen. The pairings are as follows. 1, Aaron Lloyd (Penally & Rhys O'Mara (St Elidyr) 2, James John-Davies (Hook) & Sophie Fry (Penally) 3, Cameron Kilminster (Tabernacle) & Kieran Wilkinson (Tabernacle) 4, Carwyn Pratt (Tabernacle)& Sara John-Davies (Hook)  Callum Wilkinson (Tabernacle) who was a reserve, took part.   For some it was their first time playing in a knock out competition but all did very well. Aaron Lloyd & Rhys O;Mara reaching the quarter finals only to lose by one shot ,taken on the last end. (Clive Law, Penally)

Congratulations to Andrew Hudson of Hook who beat Andrew Evans of Tavernspite in the final of the Red Card singles held at Heatherton, Tenby on Saturday 15th January 2011. Congratulations to both Andrews and also to Paul Hudson (Hook) who came in third place. Best of luck to all three players who will represent Pembrokeshire in the Welsh national singles competition later in the season.

Well done to all who took part in the Under 16 County Singles recently. Congratulations to the winner - Aaron Lloyd (Penally), the runner up - Rhys O'Mara (St. Elidyr) and to Sophie Fry (Penally) who came in third place.

Congratulations to Mike Harries and Mark Thorpe (Freystrop) who beat Archie and Margaret Greaves (Penally) in the County Doubles and also to Tom Windsor, Gordon Bowen and Dilwyn Harries (Narberth) who won the County Triples, beating Jean John, Hazel Wadey and Ken Bellamy (Badgers) in the final. Congratulations all.

The County Singles Competition was played at Heatherton on Saturday 30th October 2010. Congratulations to Jonathan Gladstone (Hook) who beat Andrew Evans (Tavernspite) in the final. The County Fours competition was also played at Heatherton, Tenby on Sunday 31st October 2010. Congratulations to the Evans family (Sheila, Tomos, Alan and Andrew) of Tavernspite who beat Jodie John, Gareth Davies, Neil Crawford and Jonathan Gladstone of Hook in the final. Also, special congratulations go to Jodie John who is just 7 years old and reached the final of the county fours competition on her compeition debut - a rising star! Well done Jodie.

The annual Welsh Open Triples were held at Llandrindod Wells on Sunday 10th October 2010. The winners were Chris Martin, Thomas Brown and Ben Haddon from West Glamorgan. They beat Dorian Hudson's team from Carmarthenshire in the final. Well done to all the Pembrokeshire players who took part in the competition. 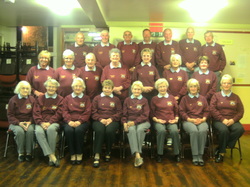 The details on the 'Clubs' page is correct as of last year. If you would like me to update your club information for this season, please let me know by completing the form on the 'Contacts' page or email me. You can even send me a team picture and some history about your club, as Tabernacle have done. Visit the 'Clubs' page for more information on Tabernacle Short Mat Bowls Club. 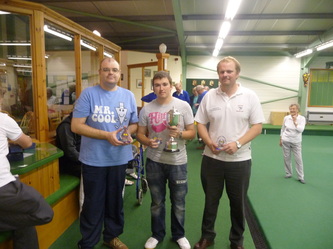 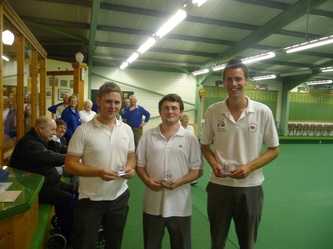 Congratulations to Jo Barker and Margaret Greaves of Penally who won the Roy Banner doubles competition held at Hook Bowls Club on Sunday 12th September 2010. Congratulations also to Selwyn Jenkins and Bernard Williams of Letterston who were runners up. Pictured below: Presentations made by Dot Banner to the winners and runners up of the Roy Banner Doubles 2010 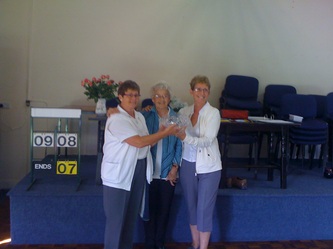 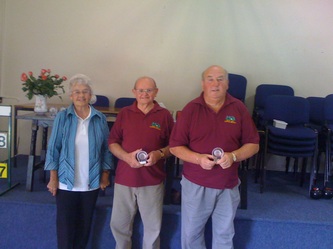 Welcome back!
I am just updating the website ready for the start of the new season. There will be a few new features to the site, so keep checking over the next few weeks for updates.
Also, if you have any news stories for the site, I would love to hear from you... just drop me an email.

New Feature: News Archive.
I have moved all the news from previous seasons into a brand new archive which can be viewed by clicking the link at the bottom of this page, or clicking here.

New Feature: Hot Shots!
If your team scores 8 shots in one end during a league game, county or Red Card competition, let me know and your achievement will be posted on the website. You can view the Hot Shots page by clicking on the link at the top of this page. 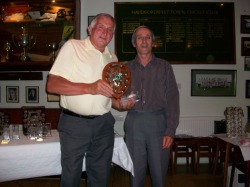 The County Dinner was held at Haverfordwest Cricket Club on 4th June 2010. Click on the photograph on the left to view more photos from the evening.